How Billionaires Can Help the Fight for Climate Justice 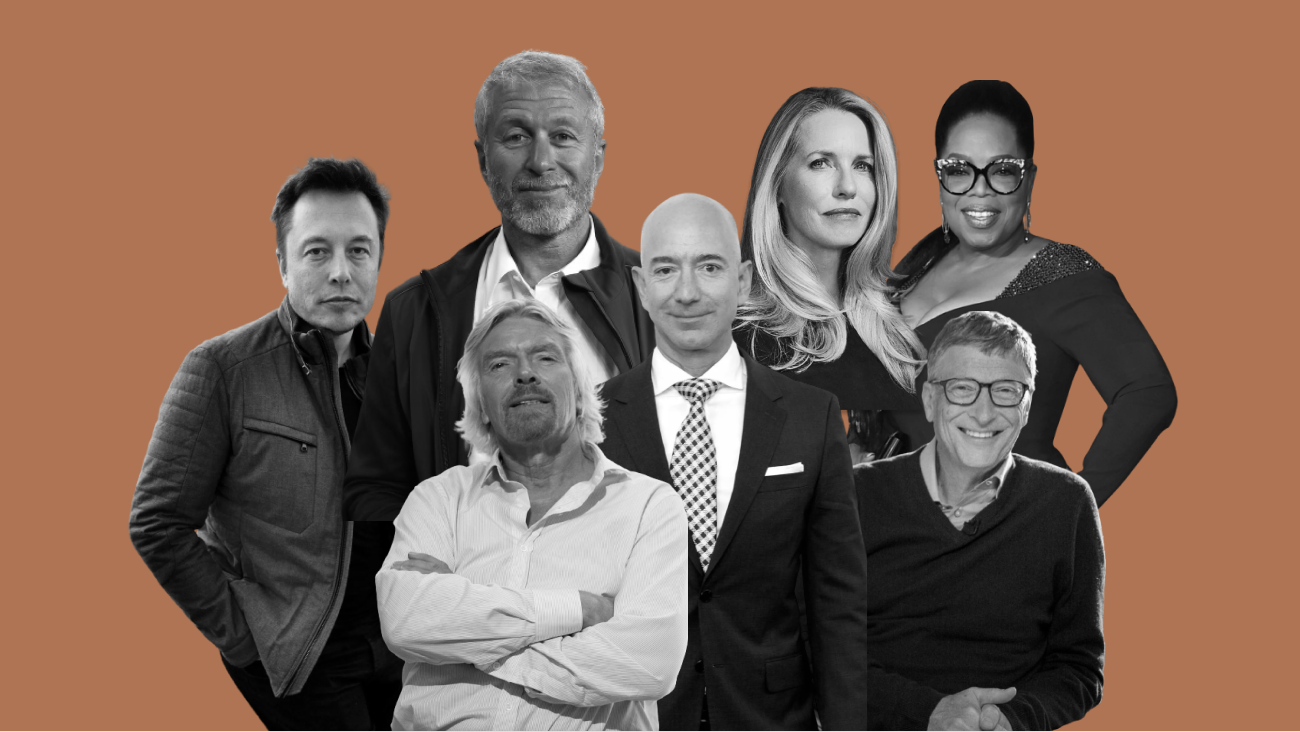 From sprawling estates, to private jets and yachts, to space tourism, billionaires can afford luxury lifestyles most folks can only dream of. But the perks of wealth come with a hidden price tag: massive greenhouse gas emissions.

Billionaires have carbon footprints that are hundreds, sometimes thousands, of times larger than the average person. Today, we’re taking a look at their outsized impact – and how tackling economic and carbon inequality is at the heart of achieving net zero emissions.

Billionaires are rich, and they’re getting richer

Billionaires hold an enormous share of humanity’s financial influence. A 2020 Oxfam report found the world’s 2,153 billionaires hold more shared wealth than over 4.6 billion people, more than 60% of the global population. The COVID-19 pandemic has exacerbated this dynamic.

Billionaire wealth has skyrocketed 40% since 2020. In contrast, the income of 99% of humanity decreased during this period, with the number of people in extreme poverty predicted to rise by a quarter million in 2022.

It’s hard to conceptualize wealth inequality at this scale. For context, if you saved $10,000 every day since the pyramids of Giza were built, you’d have just one-fifth the average fortune of the five richest billionaires. Elon Musk, the wealthiest person on Earth at the time of this article, could lose 99% of his wealth and still be in the top 0.0001% of richest people.

According to the UN’s Intergovernmental Panel on Climate Change (IPCC), ​​we need to cut global emissions up to 50% by 2030 to avoid the worst of climate change. This responsibility isn’t shared equally across the globe – and neither are the consequences.

Emissions rise hand in hand with income. That’s because income is correlated with consumption, and goods and services require energy to produce. We power most global energy use with fossil fuels, which emit heat-trapping greenhouse gasses when we burn them.
‍

In the US, for example, where the median household income is around $70,000, the average person emits 15 tons of carbon dioxide equivalent (CO2e) per year. In contrast, the average resident of the Democratic Republic of Congo earns less than $400 annually and produces just 0.03 tons of CO2e – 500 times less than the average American.

By 2030, the emissions associated with the richest 10% alone could push the planet past the 1.5C tipping point. This means, even if everyone else aligned their lifestyles with global targets (2.2 tons COe per person per year) we couldn’t avoid the worst of climate change.

In wealthy nations, more folks are privileged to be in the top percentiles of global earners. In fact, an income of $60,000 in the US has more buying power than 99% of people on Earth  Those of us with higher incomes have a unique power and responsibility to help reduce emissions – simply because our spending has an outsized climate impact.

The bottom 50% of global earners produce just 12% of individual emissions. These folks will feel the brunt of climate impacts, despite bearing the least responsibility and the fewest resources to adapt.

According to the IPCC, economic damage from climate change will cost people in poorer, developing nations a higher percentage of their income than those in richer nations; and up to 183 million additional people in these nations could become undernourished by 2050 in high-warming scenarios.

Emissions skyrocket at the very top of the earnings ladder. One analysis of 20 of the world’s billionaires found a median carbon footprint of a whopping 8,190 tons – nearly 550x the average American. A more conservative estimate suggests the top 0.01% of earners (billionaires and multi-millionaires) produce 2,350 tons of CO2e per capita each year.
‍

Regardless of the exact number, one thing is clear: billionaires’ emissions are two to three orders of magnitude larger than the average person’s.

Of the billionaires in the first study, 15 owned private yachts – arguably the single worst asset to own from an environmental standpoint. “Superyachts,” maritime vessels 78 feet or longer, produce an estimated 7,000 tons of CO2e annually (over 1,500x the average family car).

Jet-setting also packs a punch. Take Bill Gates, for example, who has a “moderate” carbon footprint for a billionaire. In 2017, Gates took 59 flights covering 213,00 miles – more than eight times around the world. These flights alone produced 1,600 tons of greenhouse gas emissions, equivalent to the average yearly emissions of 105 Americans.

While aviation accounts for under 3% of global emissions, it’s a prime example of how wealth drives carbon equality. Just 1% of frequent-fliers are responsible for half of global aviation emissions, while 80% of humanity will never step foot on an airplane.

The most carbon-intensive spending, however, happens at far higher altitudes. Research suggests a single 11-minute space flight (like the one recently taken by Amazon founder Jeff Bezos) emits at least 75 tons of carbon dioxide per passenger. That’s more than the poorest billion people on Earth will emit in their entire lifetimes.

The most recent IPCC report shows understanding economic inequality is essential for meaningful climate action. Billionaires might feel immune to the consequences of climate change – but they have an outsized responsibility to help reverse it.

According to the IPCC, “wealthy individuals contribute disproportionately to higher emissions, and have a high potential for emissions reductions while maintaining decent living standards and well-being.”

While most folks need to reduce their carbon footprints, billionaires can have a far greater individual impact, simply because their emissions are far higher. In fact, anyone with a higher income can redirect substantial funding from high- to low-carbon sectors. Joro users lowered their emissions by 21% in 2021 just by shifting how they live – they also saved $3,300 on average, because consumption and carbon are correlated.

We can reduce global emissions by 40-70% through lifestyle changes alone. It takes fewer of us than you think: just 10-30% of committed individuals can spark a shift in social norms. From short-haul flight bans in Europe, to plant-based diets reshaping food systems, to skyrocketing electric car sales – we don’t have to look far for proof that small groups of people committing to meaningful change makes a difference on a global scale.

The good news? We already have the technology to cut emissions in all sectors by 50% or more by 2030 (which aligns with global climate targets). Unfortunately, lack of political will, corporate policy, and an unwillingness to change are slowing the transition.

We have sufficient global capital and liquidity to reach 2030 goals – but we need cash to flow to these solutions at about three to six times its current rate. Billionaires and higher-income folks can accelerate the process with their investments.

One way anyone can support companies and projects that reduce and remove carbon is through purchasing high-quality offsets, like those in Joro’s Carbon Portfolio. Furthermore, for anyone who holds savings or investments, there are key financial ways to support a lower-carbon economy, including by switching to a climate-safe bank,  divesting 401Ks and stocks from fossil fuels. Those who can afford it can even make direct investments in climate-focused startups and nonprofits.

By understanding and properly incorporating economic inequality, climate policy can incentivize action by households with the highest impact, without lowering one’s quality of life.

According to the World Inequality Index, applying a 10% tax rate on the value of carbon assets owed by global multi-millionaires would generate at least $100 billion in one year. That’s about 1.5 times the estimated annual costs of climate adaptation in developing countries.

Another way to even the playing field is to target luxury spending. Taxing high-carbon purchases like business class flights, private jets, and superyachts can generate revenue for investments that benefit the many, instead of the few.

Governments need to overhaul infrastructure to make low-emissions lifestyles accessible to all people. One way to do this is by making billionaires pay their fair share of taxes. According to White House estimates, billionaire households paid an average 8.2% of their income in federal taxes between 2010 and 2018 – less than the average American.

President Biden’s proposed Billionaire Minimum Income Tax would establish a 20% minimum tax rate on US households worth over $100 million. (For context, the average American making just over $40,000 per year pays 22%.) More than half of revenue from this tax would come from billionaires alone – which also taxes appreciation in value of billionaires’ investments before they’re sold, known as “unrealized” gains.

Data shows most Americans support higher taxes for billionaires, regardless of party affiliation, but Biden’s bill is currently stalled in congress. Call or email your elected officials to urge action.

If you spend money, you can take climate action

Anyone who participates in the global economy has the power to influence emissions. Regardless of how much or little money you have, you can take climate action through how you choose to use it.

As consumers, we can green society from the ground up. Joro’s Guides to Climate Action unpack how to rally for systemic change while taking control of your personal impact.

Build your carbon intuition with Joro

Joro makes it easy to understand the emissions from your spending. Just download the app and link your cards to reveal your carbon footprint. Then, explore personalized tools and resources to live more sustainably and offset the impact you can’t avoid.