Joro releases 2021 “Year of Decarbonizing with Joro”, Demonstrating Emissions Reduction of Over 20% 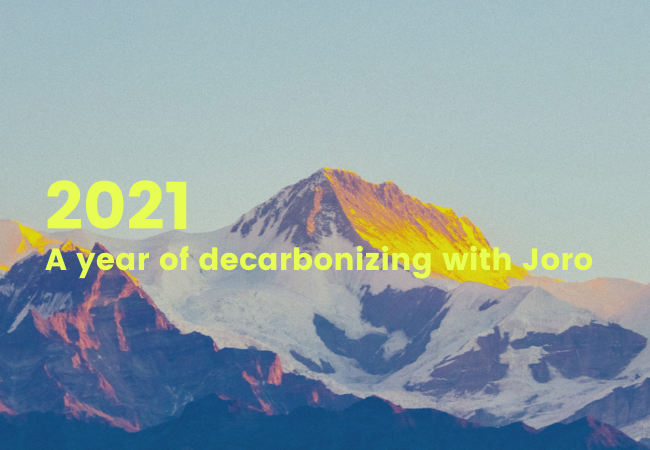 December 16, 2021 - SAN FRANCISCO, CA - Joro, an app that harnesses the collective power of people to tackle the emissions behind their spending, today announced the release of its 2021 Year in Review, “2021: A Year of Decarbonizing with Joro”.

The areas in which people reduced the most carbon were by flying less and using less energy in their home utilities. On average, Joro users saved $275/ month ($3,300 per year!) by making more sustainable choices.

When it comes to offsetting, folks who signed up for offsets actually reduced 6% more carbon than before they bought offsets, suggesting that offsets can incentivize reduction when used as a price on carbon.

Joro’s app enables people to go 'Net Zero' by tracking and offsetting the emissions of everything they buy, automatically. For example, if someone buys $30 of gas at the pump, Joro's algorithms accounts for the price of gas in their area and the carbon intensity of gasoline to estimate their emissions, and automatically purchase the right amount of high-quality, vetted carbon offsets to neutralize those emissions.

Joro users are artists, professors, doctors, engineers, entrepreneurs, artists, and more, from Gen Z to Boomers, who aren’t willing to wait until 2050 to reach net zero. Just like a sustainability team might do the work for a company to go net zero, the Joro app brings meaningful emissions reduction and removal within reach for people in their everyday lives.

“While the governments of the world continue to fall short in implementing impactful climate measures, our technology unites people who want to take action into their own hands,” says Sanchali Pal, founder and CEO of Joro.

Joro’s full Year in Review can be viewed here. To learn more about the vetted carbon offset programs that Joro supports, click here.

Folks in the U.S. can download Joro on the  App Store or Google Play to begin to make an impactful climate difference. People in countries outside of the U.S. who’d like access to Joro can sign up for the waitlist here.

Joro is on a mission to harness the collective power of people to decarbonize the economy. With the Joro mobile app, people can track, reduce, and offset the emissions behind everything they buy. Joro’s proprietary algorithms automatically estimate the carbon impact of every purchase, and their expert team vets and curates high-quality offset projects for members.

Joro is a seed-stage startup founded by Sanchali Pal and based in Oakland. The company is backed by notable investors including Sequoia and founders of Headspace, Fitbit, and Candy Crush. www.joro.app.