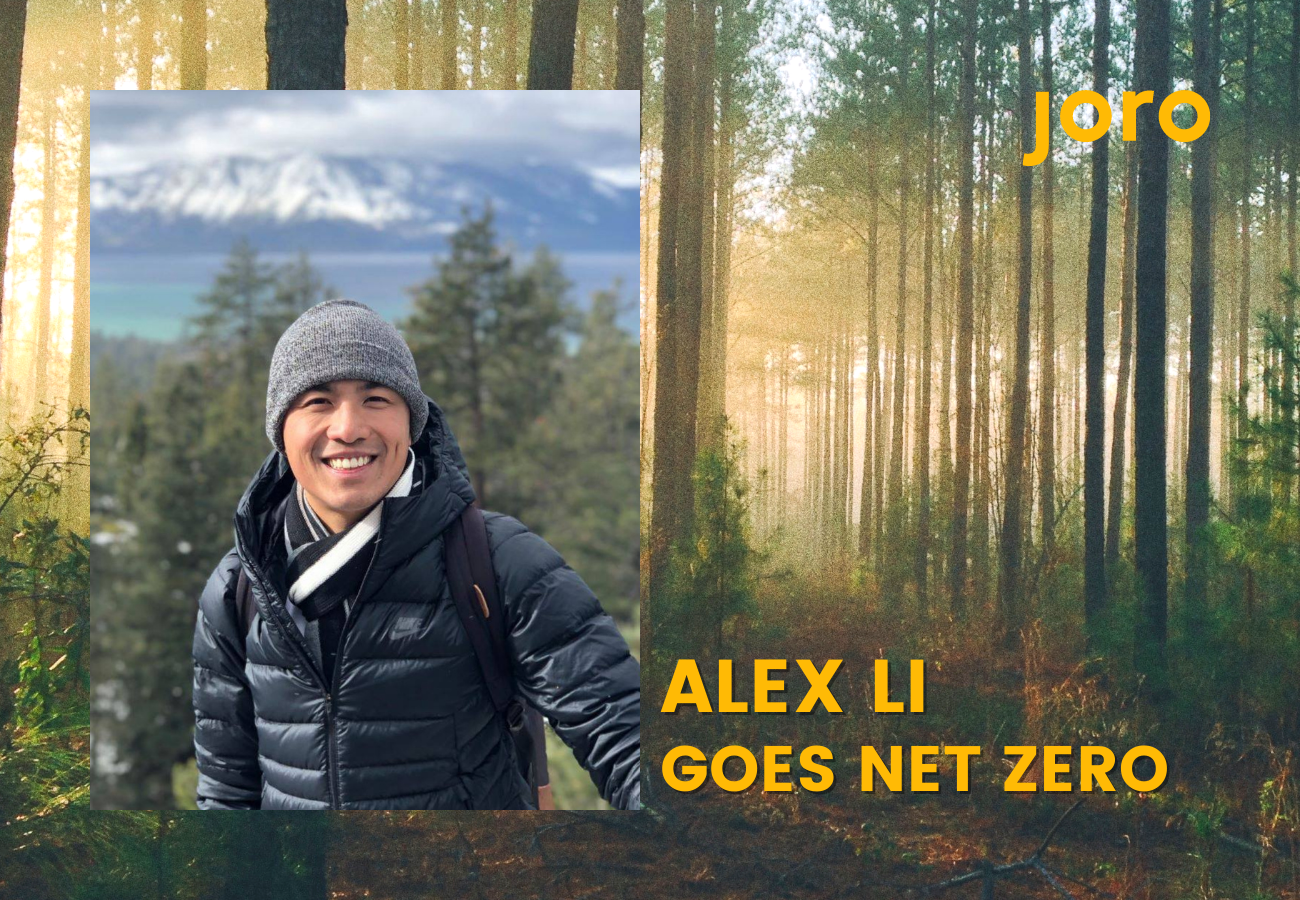 Alex Li is a Kiwi (New Zealander) who lives in San Francisco and works in clean energy and hardtech investment. A passionate outdoors person and environmental advocate, Alex uses Joro to match his lifestyle with his values.

See more People of Net Zero features here and learn more about the impact Alex has had with his network in his Joro influencer profile.

Alex Li on Climate Action & Taking Your Work Home With You

Alex Li has had a lifelong passion for the environment. But, while you can find him exploring Bay Area hiking trails these days, his experience of the word “environment” is bigger than redwood trees and rocky coastlines.

Alex’s family moved from Guangzhou, China to New Zealand when he was three. Industrialized Guangzhou was too polluted, with too few outdoor spaces, he says. His parents wanted to give him a childhood somewhere greener and cleaner.

This early experience made Alex keenly aware of how important the environments we live and grow up in are to our wellbeing. It also instilled a deep appreciation for nature. He’s always loved spending time outdoors, and even headed up his high school’s environmental council.

But nature isn’t just beautiful, it’s forceful. And as global temperatures and sea levels rise and extreme weather events accelerate – our living environments are caught in the crossfire.

Having grown up largely in New Zealand, an island nation, Alex is passionate about the way climate change disproportionately affects coastal and low-income communities. In fact, it’s the reason he decided to focus his career on climate.

“[Poorer populations] have fewer ways to guard against climate change,” he says “whether that’s just even having an air conditioner, or living near the coast, or being less flexible to move.”

While studying finance and statistics at Auckland University, Alex helped found the Auckland Microfinance Initiative (now the Impact Consulting Group). This student-run charity works to alleviate poverty through micro-financing and social enterprise. After undergrad, his enthusiasm for environmental issues led him to the Bay Area, where he completed his MS and MBA in Sustainability at Stanford University.

Today, Alex works for Modern Venture Partners, a venture capital firm where he focuses on clean-tech and frontier technologies. But even with a long environmental resume, Alex says he has trouble taking his work home with him.

“I hope you never see my recycling bin or my trash,” he says, “because there’s just so much packaging and unsustainable products.”

Both Alex and his fiancé, who works in slow fashion, are busy professionals in a city that moves at breakneck speeds. This leaves little time at home to figure out which climate-conscious habits matter most.

“We both suffer from the same problem,” says Alex. “Our line of work is around sustainability, but we just haven’t matched our lifestyles to it.”

Alex knows lasting lifestyle change happens one healthy habit at a time. He even developed a habit-building app with his housemates a few years back. The app, CommitMe, helps users stick to positive changes, like quitting smoking or working out, through social goal-setting. Climate-conscious users can focus on building habits like driving less, composting, and cutting out plastic.

But even after all that, Alex says there’s still dissonance between his pro-planet values and the choices he makes at home. While he has the intention to live more sustainably, he’s struggled to find a middle ground between low-hanging fruit and completely overhauling his life.

With Joro, building climate-specific habits with a community of like-minded users piqued his interest; and being able to link his cards and track his carbon footprint on autopilot made it easy to stick with.

“When Joro came along, it seemed like a very easy, automated way to reconcile those two parts: my professional and personal life.”

For Alex, competition and social accountability keep his head in the game. (He even went vegetarian for several months in college to keep good on a bet with friends.)

Public progress stats and a live community leaderboard make Joro the perfect place for people with a competitive spirit – and Alex has grown a large community on the app. “I talk about it constantly with my classmates, and have gotten all of my friends to join,” he says.

Earlier this year, Alex started automatically offsetting his monthly emissions through Joro’s Net Zero membership. He also used Joro to identify a few specific, manageable habits he felt had the greatest chance of sticking to.

For instance, rather than ambiguously hoping to “drive less,” Alex decided to telecommute to his weekly meeting in Palo Alto, and be more intentional about combining weekly errands into fewer trips.

He’s also started being more conscious of his basic consumption habits. He’s recycling more, buying more sustainable products, and taking reusable bottles with him when he’s out and about. (Worldwide, we sell a million plastic bottles every minute – over 580 billion every year!)

Identifying and financially supporting future solutions is another important part of Alex’s climate action plan. And in the innovative, high-tech ecosystem that is San Francisco – there are countless exciting teams to support.

These innovations keep Alex hopeful about our ability to reverse climate change. But what worries him is, simply: that we won’t.

“We’ve been talking about this issue since I was, what, ten?” he says. “We’ve seen An Inconvenient Truth. There have been like twenty accords. But if you look at the statistics, it’s just getting worse.”

Still, the innovations Alex sees on a daily basis help him stay positive. If you believe some of these large-scale solutions can achieve what they’re working for in the next five or ten years, he says: things could really change.

“The grim pictures that we see don’t account for that innovation and human ingenuity.”