People of Net Zero: Myra Gupta of Teach for America 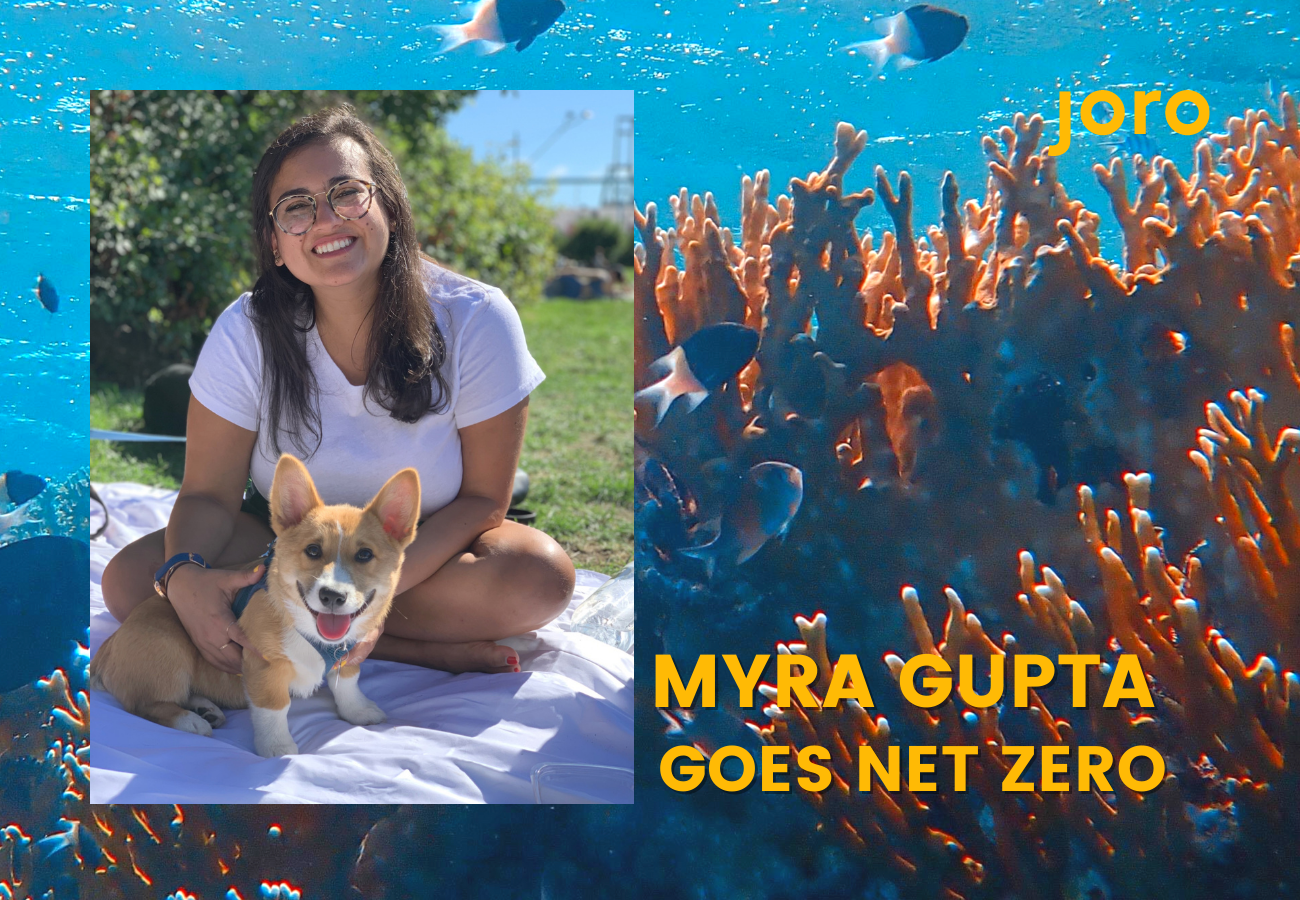 Myra Gupta is an educator, coach, social justice advocate living in New York City. A member of Joro’s Carbon Coaching program, Myra is a firm believer in the power of collective action, human ingenuity, and seeking small and mighty next steps.
‍
See more People of Net Zero features here and learn more about the impact Myra has made with her network in her public Joro profile.

What climate action, seeds of change, and sustainable dog-momming have in common.

It’s not uncommon to see your city with new eyes when you come home after traveling. But for Myra Gupta, a visit to Seattle sent her gaze in an unexpected direction: the trash bins lining New York City sidewalks.

In Seattle, a city with a mandated composting program, Myra got accustomed to mindfully sorting recycling, trash, and organics. When she returned to New York City she was, in her own words, “appalled at the lack of options.”

“I started noticing garbage on the street in different ways,” Myra says. After visiting the Arcadia Earth exhibit and learning how decomposing landfill waste releases harmful methane gas, she reached out and asked her apartment manager to start a composting program in her building.

When that effort led to a dead-end, Myra sent an email to her city councilperson. If she couldn’t bring composting to her apartment complex – why not try to get the whole Borough on board?

New experiences expand our vision of what’s possible. And if she hadn’t encountered a different way of doing things in Seattle, Myra says: “I don’t think I would have seen the problem quite so clearly.”

Although it remains to be seen how soon Myra’s neighborhood will allow composting, she’s not deterred. She believes in the power of these small seeds.

“People make systemic change,” says Myra. “It’s not like ‘the system’ is this amorphic thing that exists without us. We’re a part of it, and it’s important to recognize [the role we play].”

As a managing director at Teach for America, Myra knows a thing or two about systems. Every day, she works with teachers in New York City schools, the country’s largest school system.

In her role, Myra ushers in new educators, helping them get the leadership training they need to be effective advocates for thousands of students and their communities.

As an educator, Myra recognizes the importance of being able to visualize one’s progress.  Seeing small steps add up, she says, reframes narratives of what’s possible.

“If students can realize that a narrative they had about themselves isn’t true,” she says, “they’re much more likely to see different possibilities.”

When Myra decided it was time to start putting in the work for climate action, she knew she wanted to take the same approach. But in the face of immense and complicated problems like climate change, it can be hard to know where to start. There’s often no clear path forward or singular action to solve the problem at hand.

So, Myra asked herself a question she turns to often: what’s one small and mighty next step?

The trick, she says, is to identify something you can do - however imperfect - to make

progress. Even if you’re not sure of your ultimate end goal.

“If you can take one step in the right direction, your next step is going to be more informed,
Myra says. “And that’s better than doing nothing at all.”

With the help of Joro, Myra focused on accessible goals she could make part of her daily life. She switched her utilities to clean energy via Arcadia power, started walking and biking more instead of driving, and started eating less meat.

These small changes could have a huge impact if they were taken at a societal scale. If everyone in the US drove 10% less, for instance, we’d cut roughly 110 million metric tons of carbon dioxide – the same as taking about 28 coal-fired power plants offline for a year.

If we all committed to Meatless Monday - and ate a plant-based diet once a week - we’d each save the carbon equivalent of driving 348 miles every year. In a country of 330+ million people, those miles add up.

When it’s time to buy food for her corgi Theo, she now chooses chicken or turkey over beef, which has a carbon footprint four times greater than poultry. She’s also cut down on buying clothes online, which often generates more emissions than shopping in-store. Instead, she’s thrifting more and extending the lifetime carbon footprint of unique and pre-loved clothing.

In a world where the onus of climate guilt is often placed on the consumer, it’s easy to wonder if shopping secondhand and eating Impossible burgers detracts from the real mission at hand: dismantling a world full of dirty systems.

But as a social justice advocate, self-described “gatherer,” and a firm believer in collective action, Myra cautions against underestimating the power of our daily decisions.

The choices we make every day inform what we care about, she says. And when we care about something, we’re more likely to take further action.

“Don’t diminish the power of the small thing,” says Myra. “The little things really can inspire and bring people together.”

When she thinks about our capability, as humans, to come together to confront climate change, Myra balances feeling optimistic and alarmed.

Her biggest worry is not that we’re incapable of solving climate change, it’s how bad things will have to get before we try – and whether our efforts will be too little, too late.

“As we’re seeing now,” she says, “the questions of ‘is it too late [to reverse climate change]?’ keep coming up.”

She also sees alarming parallels between the global inequities we’ve witnessed throughout the COVID-19 pandemic, the education system here in the US, and what lies ahead in a warming world.

“Political strife increases when climate change affects access to resources,” Myra says. “And I worry about even our solutions being inequitable.”

But, in the same breath, Myra notes the pandemic has given her a glimmer of hope. Nations working together to mobilize against the virus and deploy revolutionary vaccines is proof of “the potential for human innovation to come together to address a crisis,” she says.

So how do we - as everyday people - help create a healthy, just world for all?

For Myra, it’s about approaching life, and our faith in each other, with a growth mindset. It’s about making small, intentional choices that help create communities capable of meaningful, systemic change.

After all, she says, it’s not us versus each other: “It’s us as humans versus this crisis.”