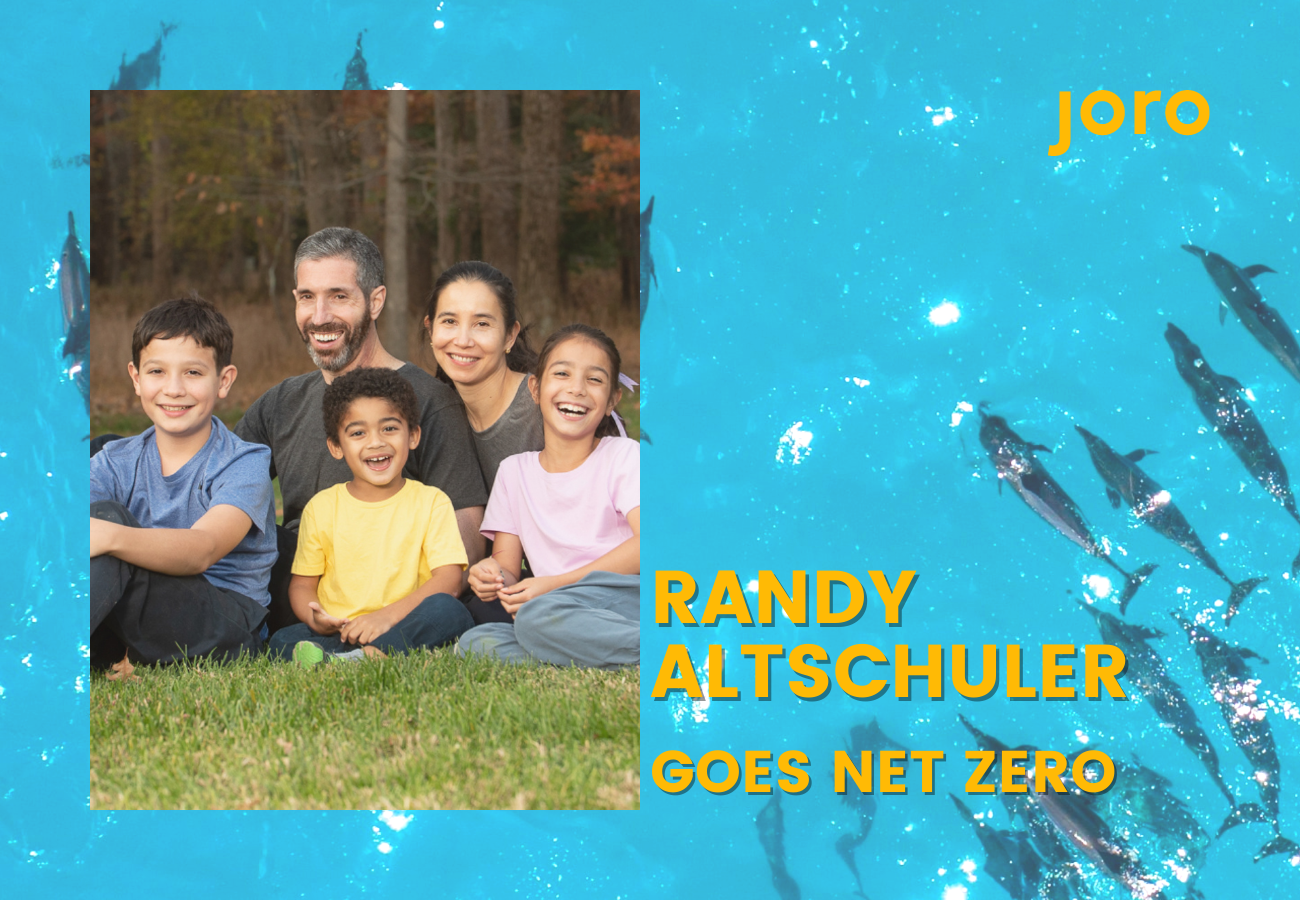 Randy Altschuler is the co-founder and CEO of Xometry, an on-demand manufacturing marketplace based in Maryland. But at home, he’s parenting through the climate crisis – and doing what he can to leave his kids a better world.

See more People of Net Zero features here and learn more about the impact Randy has made with his network in his public Joro profile.

You may not expect to find the CEO of a billion+ dollar company with dirt beneath his fingernails. But growing food in his backyard is just one way Randy Altschuler is cultivating the type of world he wants to see.

“I’m someone who’s very passionate about trying to combat climate change, and for all of us to try to get involved,” says Randy. “Including, of course, the government, but also the private sector and individuals. All of us have a role to play.”

But business as usual won’t cut it on a warming planet. And like a growing number of people, Randy worries about the hardships that lie ahead. Especially when he thinks about the world his three kids will inherit.

“My wife and I know this is an existential threat,” he says. “Our children will have a much harder life than we’ve had, and there are terrible consequences in store for them.”

It’s scary to be a parent in a climate-changing world. But Randy compares obsessively worrying about the crisis to constantly thinking about death: you lose sleep, and there’s just no upside.

Except, with climate change, there’s one important upside. “In this case, it’s the opposite of death,” he says. “In that, you can do something about it.”

So, at home, Randy and his wife do their best to transform their worry into action. This means talking openly with their children about what’s happening to the planet. It also means using Joro to manage their household footprint to net zero.

Randy and his family use Joro to track their carbon footprint based on their spending, and have made several lifestyle changes to reduce their emissions. One high-impact action they’ve taken is installing solar panels that power their daily energy demands. Home energy use accounts for roughly 20% of greenhouse gas emissions in the United States, so this matters.

At mealtime, Randy opts for a planet-nourishing, vegetarian diet. (If everyone on the planet did this, we’d slash food-related emissions by 63%!). In addition to growing some of the items on their dinner plates, his family has started composting food scraps.

We waste 108 billion pounds of food each year in the US, which produces around 3.3 million tons of CO2e from farm to landfill. But when they’re composted, organic materials break down into nutrient-rich soil instead of decomposing in landfills and releasing potent methane gas.

Ever the entrepreneur, Randy recently co-founded another company to make home composting more accessible. His new venture, aptly named Mr. Fusion in a nod to Back to the Future, is developing a home bio-reactor that turns everyday waste into clean energy.

To compensate for the emissions they can’t yet reduce, Randy’s family uses Joro’s Net Zero subscription to support projects around the world that reduce and remove carbon.

For Randy and his wife, the choices they make at home are only part of the mindset they want their children to develop. Since his kids are young people growing up with privilege, Randy says it’s important they realize that “more” is a choice.

“You know, all of us need to use less, and I’m trying to instill that to a certain extent in my own children: that less is more in this case.”

As a family of means, Randy says he recognizes what they don’t do can be as important as what they do; which is why he decided not to buy a second home. (Wealthy US households have carbon footprints around 25% higher than low-income ones, primarily due to larger living spaces.)

“There’s all this talk, and rightfully so, about privilege,” he says. “Well, we’re ever-privileged as human beings on this planet, and we have a responsibility to treat it better.”

But climate action is about more than just changing individual consumption habits. It’s about amplifying our personal actions to push for systems change.

Giving Xometry customers the option to offset their manufacturing carbon footprint is one way Randy amplifies his climate action practice at work. He even pledged 1% of the company’s IPO proceeds to a fund that primarily invests in climate initiatives.

He is also active in advocating for broader change. As an alumnus of Princeton University, Randy is active in the Divest Princeton campaign, which calls on the university to divest its $26.6 billion endowment from fossil fuels.

As a result of the campaign, the university announced in May it would divest from thermal coal and tar sands. But climate advocates like Randy say that falls short: the community has set its sights on 100% divestment.

Furthermore, Randy believes political will is essential for far-reaching climate action. In 2010 and 2012, he ran for Congress in New York’s first district as a pro-climate Republican, losing by a narrow margin.

But there’s no room for a narrow loss on climate. “There are certain issues that both Republicans and Democrats always agree on,” he says, “and [climate change] should be one of them.”

For Randy, climate action means finding ways to champion the planet wherever you can. But like any good entrepreneur, he knows you can’t be perfect from the launch date.

“You don’t have to become a vegetarian tomorrow, and you don’t have to give away all your belongings,” he says. “But everyone can play a little role in this, and that will make a difference.”

Beyond simply neutralizing his footprint, Joro’s Net Zero membership is an easy way for Randy to see the carbon makeup of his shopping habits – and informs where to focus for meaningful impact. It’s also an opportunity to be part of a community that is normalizing caring about climate change.

“That’s why I’m so excited about Joro, because they make it easy to do the right thing,” he says. “That said, we need to do a lot more. There need to be lots of opportunities for people to channel their energy into the right thing.”