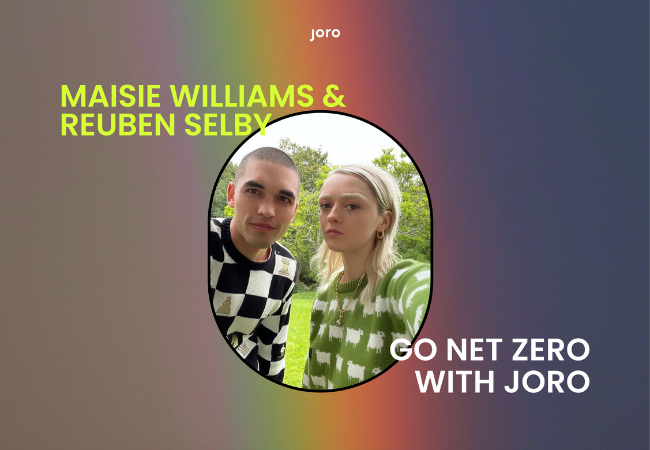 People of Net Zero is a series highlighting the stories of people using Joro to track, reduce, and offset their emissions, and amplify their impact with community action.

Maisie Williams is an actress, producer, and investor best known for her role as Arya Stark in HBO’s Game of Thrones. Reuben Selby is a creative entrepreneur and founder of an eponymous fashion brand at the crossroads of sustainability, introspection, and creative expression. Together, they’re part of a new generation of young people using their platforms and passions to help solve the climate crisis.

See more People of Net Zero features here and learn more about the impact Maisie and Reuben have made with the Joro community here.

Maisie Williams and Reuben Selby are the faces of a new generation of climate activists.

When it comes to Maisie Williams’ and Reuben Selby’s climate action resumes, there’s no shortage of talking points.

In April 2021, Maisie became the first-ever WWF Global Ambassador for Climate and Nature.  That same month, Reuben’s sustainable clothing brand was featured at the grand opening of GROW, a circular fashion exhibition by Amsterdam’s Fashion for Good museum.

But Maisie and Reuben started down the path to these impressive milestones years ago. Like most young people, they’ve been aware of the looming climate crisis nearly their whole lives. And experiences they had as children are what led them to become the climate leaders they are today.

Maisie’s climate education started in the classroom. She went to a primary school that educated pupils on climate and the environment, lessons about carbon footprints and recycling were common in the curriculum.

That experience, she says, coupled with seeing the impact of rubbish on family nature holidays, is what sparked her lifelong interest in sustainability.

“That was kind of my goal in the beginning,” she says. “You know, get rid of litter and recycle – and it just kind of grew from there.”

“Grew” might be an understatement. With over 10 million followers on Instagram, Maisie uses social media to raise awareness about sustainable and environmental causes (like this video, where she “performs” excerpts from the Green New Deal). She also advocates for change in the fashion industry as a Global Sustainability Ambassador with H&M.

An ocean lover, Maisie has traveled to Japan to protest the Taiji dolphin hunt, a controversial event where the animals are rounded up and sold to marine parks or slaughtered for meat.

Recently, she co-produced Searching for Chinook, a documentary about ocean health. The soon-to-be-released film follows a dwindling population of Southern resident orcas as they struggle to survive off the coast of San Juan Island.

Like Maisie, Reuben’s passion for sustainability is rooted in his early years. His mother, who immigrated from the Philippines to the United Kingdom, had a simple upbringing. And Reuben says she imparted those values to her kids.

“She would always say ‘you have to eat every single grain of rice on your plate.’ So that kind of mentality, to never waste anything, has always had a really big impact on me.”

Childhood visits to the Philippines exposed Reuben to a side of the environmental crisis often obscured in wealthier nations. Seeing the scope of trash and pollution in cities like Manila was when he truly internalized the true scale of our global impact.

“You don’t really see that [type of pollution] in the UK,” says Reuben. “It’s more subtle. It’s more in the consumption.”

Early experiences like this inform the mentality Reuben brings to his professional life. He’s a the founder of a platform for creatives (Contact) and a fashion brand (Reuben Selby).

The fashion industry has a huge ecological footprint: it’s responsible for around 10% of global carbon emissions and nearly 20% of the world’s wastewater. When he launched his own line, Reuben wanted to create clothing fit for a sustainable future.

As a label, Reuben Selby follows circular fashion principles – meaning it seeks to recycle, reuse, and extend the lifespan of all materials. To achieve this, Reuben works with partners like Infinited Fiber to source regenerated fibers and create garments made from 100% post-consumer waste. He also works with local regenerative farms - like Freshwater Farm, run by Maisie’s cousin - that do carbon offsetting.

In addition to leveraging their platforms to advocate for climate causes, Maisie and Reuben focus on what they can do as people.

In their household, they shop secondhand and donate items they no longer use. They travel mostly by public transport and use an electric vehicle for longer trips. Maisie uses clean and vegan beauty products. And both try to buy few things beyond what their jobs require.

Consumer activity directly influences 65% of global emissions, so these choices matter when we make them together.

But it’s tough to completely eliminate your impact in a fossil-fueled world, and even the best among us will have a carbon footprint. Maisie and Reuben’s remaining lifestyle emissions come from a few primary sources: flights, powering their homes, and purchasing a digital currency called Bitcoin.

Bitcoin is “mined” by high-powered computers competing to solve complex mathematical equations. Unfortunately, this energy-intensive process is often powered by fossil fuels – which generates a hefty carbon footprint. As a result, Maisie and Reuben’s moderate cryptocurrency investments generate around 30% of their personal emissions.

To compensate for the emissions they can’t avoid, Maisie and Reuben use Joro to bring their personal carbon footprints to net zero. Follow the links above for a full breakdown of their carbon footprints and community impact. (Psst! While they have early access to Net Zero, Joro plans to expand to the UK in 2022.)

In the face of a problem as big as climate change, individual action can feel like an inadequate solution. But at a base level, Reuben says “it feels good to do the right thing.” And beyond that, it can shape who we are in the world.

“Focus on yourself as an individual and try to make the right decisions,” he says. “If you focus on that, it will change your life in many different aspects as well.”

Maisie agrees and says even if thinking about the future feels daunting, just move in the right direction with your own life.

“You don’t need to take on the weight of the world,” she says, “Just do what you’re doing for yourself, and trust that other people will do the same.”

We need to keep trusting and hoping if we want to reverse the climate crisis. And for Maisie, our capacity to do big things keeps hers strong.

“We’ve achieved such incredible things as a human species,” she says “There is so much drive and passion to innovate and create wonderful things – I just know that it’s so within our capabilities to solve this.”

Maisie knows not everyone shares her hopeful attitude and worries social and political turmoil could get in the way of our ability to secure a liveable future.

“As soon as we start to break down as a society, and people start to be like ‘I’m only gonna do what’s right for me,’” she says, “That’s when it does get really frightening.”

But based on a recent personality test, Reuben says one of his top-ranking traits is “hopefulness.” And when he looks at his generation, he sees a lot to be hopeful about.

“Everyone I know is concerned about climate change and sustainability and just working towards a better future.”

“It’s not that we don’t want older generations to care,” he says. “But there’s definitely a huge shift in mindset, and perspective, and personal values that’s really encouraging.”