People of Net Zero: Dejah Powell of the Sunrise Movement 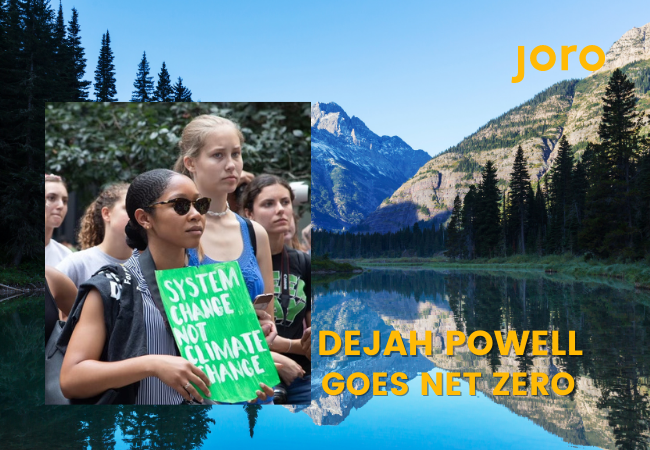 As an organizer for the Sunrise Movement, Dejah Powell helps engage and empower youth activists to take a stand against climate inaction. While she spends most of her time thinking about how Sunrise can best evolve to achieve its climate goals, her sights are firmly set on global change.

See more People of Net Zero features here and learn more about the impact Dejah has made with her network in her Joro influencer profile.

Dejah Powell on the Sunrise Movement, collective action, and how we win the world we wish to see.

If you’re ever looking for Dejah Powell, start your search on Chicago city streets. It’s not uncommon to find her there, organizing and singing resistance songs at climate demonstrations dotted with black and yellow signs – the calling cards of the Sunrise Movement.

The Sunrise Movement is a youth movement to stop climate change and create millions of good jobs in the process. They have hundreds of grassroots chapters across the United States, and they mean business.

As a member of Sunrise’s Coordinating Structure team, Dejah spends her time thinking through the best ways the organization can structure its movement to achieve its goals.

‍But her path to the Sunrise Movement didn’t start in the streets – it started on the water.

‍“I got really interested in the environment and nature as a kid,” Dejah says. “Growing up, my dad went fishing a lot, and for some reason he brought me along.”

Those quiet mornings on the water inspired Dejah to pursue a degree in Environmental and Sustainability Sciences at Cornell University. As part of her coursework, she studied abroad through a climate program in Bolivia, Vietnam, and Morocco. This experience, Dejah says, made the potential consequences of the crisis begin to feel more tangible.

“I saw how hail storms were ruining the lives of families in the Atlas Mountains in Morocco, and how agriculture was being impacted in Bolivia because of the changing climate,” she says. “It made climate change feel very real – in a way it hadn’t felt in the United States.”

‍After that, Dejah knew she wanted to ground her work in supporting communities to become resilient to climate change. So, she started searching for a call to action that met the scale and urgency of the crisis – and found it when she attended an orientation at her local Sunrise chapter.

At the meeting, the organizers shared their vision for the future: stop the villains (fossil fuel companies) and win a world that puts equity and justice front and center.

‍Dejah knew immediately she’d found her people. “I realized, if I’m going to do anything, it’s going to be helping get us closer to the vision of a world that Sunrise is organizing for,” she says.

We all have a role in the fight against climate change, but it can be tough to know where to start. To get involved, Dejah says start by seeking out people aligned with your personal theory of change – the ones who get motivated by the same things as you.

‍“Not everyone is going to organize, or be part of a social movement, or want to take action in the streets,” she says. “I think the biggest thing is finding a community of people who are thinking similarly about how to move from paralysis and anxiety to a place of power.”

The key, Dejah says, is finding people to whom you can be accountable. Whether that’s a local organization, online group, or in-app community like Joro – these relationships help spur you to action, rather than sitting in anxiety. “Which I totally get,” she laughs.

When regular folks stand together, we can push policy makers towards transformative climate action. But since 65% of global emissions are directly influenced by consumers, we’ll need to transform our own lives, too.

Lately, Dejah’s been reflecting on which lifestyle changes she could make. She believes the climate movement is for everyone, and her goal with Sunrise is to communicate this message. In the past, she felt changing her personal lifestyle for climate reasons could be alienating.

“I think I may have overcorrected a little by being like ‘I’m going to be a carnivore and drive my car, but I’m going to be in Sunrise,’” she says. “I wanted to prove you don’t have to be a super environmentalist to do the work.”

But shifting our demand is an important part of the work at hand. And recently, Dejah’s been thinking more about what that means for our everyday lives.

“[The path to zero fossil fuels] is going to require massive systemic change,” she says, “But it’s also going to require change at the individual level for every person in this country – and I think that’s really exciting.”

‍Dejah uses Joro to align her lifestyle with the world she wants to see. By linking her cards to the app, she uncovers how her spending habits translate to a carbon footprint – and where she can make changes. As a Net Zero member, she compensates for the emissions she can’t reduce on her own by funding impactful climate solutions.

As an organizer, Dejah appreciates how Joro brings together a community of like-minded folks. Users can take climate challenges together, hold one another accountable, and act collectively to create real change.

‍“Apps like Joro help people get on the path of individual transformation,” she says.

Youth activists like Dejah have forced climate change to the center of global politics, and support for net zero goals is growing every day. While it’s exciting to witness the shift, Dejah says decision makers aren’t acting fast enough – because most of them have less to lose.

“The people who have power in society are much older, and maybe aren’t thinking about what 2050 will look like because they won’t be here,” Dejah says. “I’d love to see thousands of young people getting involved in organizing that has a clear theory of change and a plan for how we address the climate crisis.”

‍With the Sunrise Movement, Dejah works doggedly to advance that vision. But it’s hard and emotional work. It’s not easy waking up every day when your job centers the existential threat to our very life. Fortunately, Dejah can look to her community when she needs a lift.

‍“Seeing people wake up and make the choice [to fight for climate action] every day inspires me to get up and do the same.”

‍Interested in the Sunrise Movement? Visit the Sunrise website to find a local hub near you – and get involved!