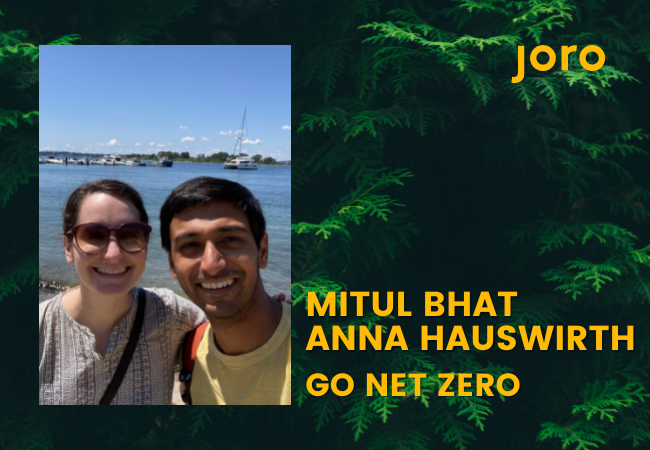 Mitul Bhat and Anna Hauswirth are recent transplants to the Boston area. A Product Manager and a Neurologist in Training, they do their best to consider the climate in every choice they make in their new city (even if it means layering up in extra sweaters).

See more People of Net Zero features here and learn more about the impact Mitul and Anna have had with their networks in their Joro influencer profiles.

Moving across the country is thrilling, but comes with a daunting to-do list. And packing up everything you own is just the beginning. There’s still a lot to figure out once you get where you’re going – especially if you’re trying to create a climate-friendly lifestyle.

Decisions like where to live, how you’ll get around, and how to furnish your new home don’t just cost money. They lock you into certain emissions pathways for years to come.

‍When Anna Hauswirth and Mitul Bhat moved from San Francisco to Boston, they knew their early choices could have long-term implications for their carbon footprints. So they made an effort to build sustainability into the foundation of their new lives.

Their first big decision? Deciding where to live.

Finding a walkable neighborhood, with easy access to public transport, was a top priority. That’s because the transportation sector produces around 25% of emissions in the United States, and Anna and Mitul own a gas-powered car, which they wanted to minimize use of.

Initially, they wanted to purchase an electric vehicle (EV). But after researching their options, they realized it just didn’t make sense. They’re renters, and couldn’t charge an EV at home.

Mitul says they probably could have found a cheaper, larger apartment that did have access to charging farther outside the city; but by living where they do, it’s easier to be conscientious about when they drive. For them, it was about finding a balance.

“We’re pretty strict, but we’re not like ‘we’ll never use our car,” says Mitul. “Instead, we say we’ll try to only use it on weekends – those kinds of manageable actions feel more achievable.”

Another major decision involved furnishing their new home. To reduce the footprint of their move, the couple decided not to buy anything new. Instead, they scoured Facebook marketplace and secondhand stores, furnishing their apartment slowly, rather than all at once.

As for their daily habits, some were easy to stick to when they moved, like biking to work and cooking at home. But others required a few extra layers of effort.‍

Anna is a California native; she’s never experienced an East Coast winter. And while a toasty home may be comforting, she knows from using Joro that heating and cooling produce nearly 40% of residential emissions in the US. So in Boston, she and Mitul try to keep the thermostat low.

“We just wear more sweatshirts, and use lots of blankets, and have comfy slippers,” she laughs.

It's a great example of how relocating can impact our carbon footprints. Before they moved, Anna and Mitul didn’t need to think as much about their thermostat. Compared to Boston, temperatures in the Bay Area are fairly mild.

Unfortunately, bundling up can’t eliminate the need for electricity. Anna and Mitul still needed to do a little research to sustainably use energy in their new home.

60% of the United States electrical grid is powered by fossil fuels, which produces around a quarter of the country’s total emissions. But at least half of US customers have access to renewables through their supplier.‍

San Francisco heavily promotes its residential renewable energy program, so Mitul and Anna were already aware these options existed. When they discovered their Boston apartment was powered by natural gas, they immediately researched whether they could opt into renewables via their new utility provider. And they could!‍

“Because we cook a lot at home, a large portion of our waste is compostable,” Mitul says. “And when we got here, it was pretty obvious that suddenly there was a large increase in our regular garbage.”

Anna knew Boston offered residential composting, but she and Mitul live outside city limits. So she did some online sleuthing, where she found that their municipality subsidizes composting for around $1.50 a week.‍

Mitul and Anna use Joro to uncover how these small choices stack up. Joro also helps them develop new habits they can stick to – like eating less meat. ‍

“I’ve been trying to get Mitul to go vegetarian for as long as I’ve known him,” Anna says. “And it’s only because of our friends and Joro that he was like: ‘I'm going to think about how much meat I eat and cut it down a bit.’

Mitul says his friends and community on Joro played a big role in his decision to adjust his diet, and that the in-app challenges and carbon footprint visualizations gave him the tools he needed to be successful.

“Especially in the beginning,” Mitul says, “the challenges were a way to say, ‘okay, can I hold myself accountable to be fully vegetarian for a week or month?’”

As Net Zero Members, Mitul and Anna compensate for the emissions they can’t reduce with high quality carbon offsets. A carbon skeptic (just like us) Mitul says the decision came down to the details.

“I’ve historically had concerns about whether offsets are really worth it,” Mitul says “But I’ve been impressed by the amount of research that goes into what [Joro] offers, and the level of detail you have about the different programs.”

Read more about how we evaluate offsets for Joro’s Carbon Portfolio.

In San Francisco, Anna and Mitul were exposed to a variety of resources folks can leverage to live more sustainably. But accelerating wildfires in the region, and the associated air quality issues, also exposed them to the real world impacts of climate change.

“I grew up there, and that’s something that never happened before,” Anna says. “It’s not a problem that’s far away – it’s happening now.”

Mitul says seeing the effects of climate change at home is what made the crisis feel real to him, too. He grew up moving around to different parts of the world – from Wisconsin to Vietnam. But it was in high school in New Delhi that he saw the effects of climate-induced water scarcity up front – and took action to reduce his own water usage at home.

No matter where they live, Anna and Mitul do their best to align their lifestyles with the world they want to be a part of. But when she thinks about her experience in San Francisco - and other extreme weather events around the world -  Anna says it’s hard not to worry about the future.

“Clearly the climate is being affected,” she says “and all the [extreme weather] is scary because it’s a sign of how it’s already happening and how it could get a lot worse. And we are not prepared.”

At least 85% of the global population has already experienced climate change impacts; and people in low-income countries are at least four times more likely to be displaced by extreme weather than those in richer ones.

“We’re socio-economically relatively privileged, and I feel fortunate for that.” Mitul says. “But I do feel really sad and scared for folks who can’t as easily adapt to the change in the climate.”

While the accelerating crisis is frightening, Mitul and Anna draw hope from solutions in the works – like  countries developing carbon taxes and rapidly transitioning to renewable energy.

The incoming generation of young and engaged climate activists is another reason to believe we can still change course.

With all the change that needs to happen to achieve a fossil-free world, it can feel hard to understand how small, personal choices impact the bigger picture. But we all have a role to play, and taking action is powerful – especially when we do it together.

“I do still have doubts about how helpful [individual action is]” Mitul says. “But I’d rather do something than nothing at all.”

For their part, Anna and Mitul plan to continue talking with loved ones, voting for climate candidates, and hunkering down for winter in a house that might be just a little too chilly. With Joro, they keep an eye on their own emissions, build their carbon intuition, and use their offset dollars to support the climate solutions that matter most.

Get the Joro app

Follow us to stay in touch with the
Joro community.