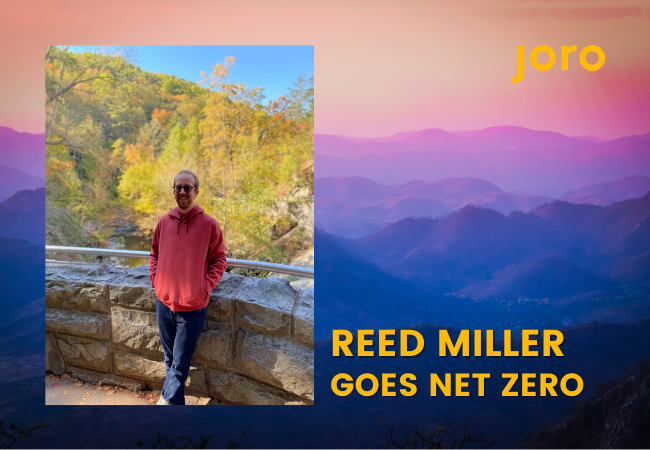 People of Net Zero is a series highlighting the stories of people using Joro to track and minimize the emissions from their spending, offset what they can’t avoid by supporting meaningful climate projects, and amplify their impact through community action.
‍

Reed Miller is an industrial ecologist, environmental engineer, and self-described data nerd. As a Postdoctoral Associate at the Yale Center for Environmental Law and Policy (YELP), Reed uses his professional and personal life to nudge global systems towards positive change.

See more People of Net Zero features here and learn more about the impact Reed has made with his network in his public Joro profile.

Reed Miller is a systems guy. He’s spent his career digging into the data to pinpoint how everything around us functions – and developing strategies to make all our global processes more sustainable.

Today, Reed is a postdoctoral associate at Yale’s Center for Environmental Law and Policy. There, he works on the Global Commons Stewardship Index, a scale that rates countries based on their environmental impact on Earth’s systems. In other words, it asks – how do a country’s activities affect the planet’s ability to sustain life?

It’s a big question. But if you look back at Reed’s younger years, it’s no surprise he’s taking it on.

Reed’s affinity for the environment took root in highschool. As a Venture Scout, the more time he spent in nature, the more alarmed he became about humanity’s impact on the planet.

So he set out to reform the first of many systems he’d take on throughout his lifetime: his high school’s recycling program (or rather, lack thereof). Though it felt empowering to take action,t the more Reed learned, the more the global environmental crisis seemed insurmountable.

“My awareness just kept growing and growing about the challenges we were up against,” he says. “For a while, I kind of had a doomsday attitude, and I wanted to flip that around.”

A turning point came when Reed got the chance to introduce Al Gore at a speaking event. The experience gave him a new perspective on how we can solve climate change: by fixing poorly functioning systems at their roots.

“I didn’t want to be helpless,” he says. “I wanted to take action to reduce my own impact, but to also try and shift ways that individuals, corporations, and organizations are able to create reasonable livelihoods for people while doing the least harm on our planet.”

Throughout his undergraduate career, Reed sought ways to fulfill that mission. And through groups like Engineers for a Sustainable World and Greenpeace, he became part of collective efforts to bring his goals to life.

He also got an up close look at the forces working to undermine those efforts: fossil fuel companies with deep pockets.

At Greenpeace, Reed worked on Project Hotseat, a campaign to make climate issues central to the 2008 congressional elections. The campaign overlapped with Barack Obama’s first presidential run and was, as Reed puts it, “an exciting - and heated - time.”

Fossil fuel companies fanned the flames. One oil and gas-backed front group even hired a hot air balloon to land in the courtyard of the North Carolina State Legislature with free lunch for government employees. The event was part of a national “Hot Air Tour” organized by Americans for Prosperity, the Koch brother’s primary political advocacy group. (According to Greenpeace, Koch Family Industries has spent over $145 million funding climate denial over the past few decades.)

Their message? Climate change was a bunch of “hot air.”

The group may have fooled some folks, but not Reed. Instead, the experience inspired him to continue down the path of making climate a central part of his life’s work.

In the years that followed, Reed went on to continue his graduate education at MIT. There he discovered industrial ecology, a field of study that works to evaluate and improve production and consumption systems, likening them to how natural ecosystems process and reuse resources.

“I was really inspired by the potential of being able to assess, from a systems perspective, what the life-cycle impacts of products are,” Reed says. “And being able to really pinpoint, ‘Aha!’ if we fix this, then that can change the course of things.”

After spending several years at MIT’s Materials Research Lab, Reed pursued his PhD in Industrial Ecology at Yale. There he worked on the Capital-Inclusive Footprint Tool for the US (CIFT-US).  This tool is based on the US Environmentally-Extended Input-Output Model (USEEIO), an EPA-created tool for calculating carbon emissions and environmental impacts.

Fun Fact: The CIFT-US is integral to Joro’s Carbonizer, the algorithm we use to determine your carbon footprint when you link your cards. (Reed is also a member of Joro’s Expert Advisory Board, and contributed to our white paper.)

Reed’s goal with his research is to provide practical and relevant information people and policy makers can use to make informed choices. “That’s why I got into engineering,” he says. “It’s like, okay, we’ve got these problems – but what are the possible solutions?”

Off the clock, Reed is always looking for ways to nudge the people around him and the institutions he’s a part of to take action.

“Clearly I, Reed Miller, won’t be able to get ExxonMobil to divest from fossil fuels on my own,” he says. “And that’s where we need to use our power collectively.”

At home, he tries to make choices reflective of the world he’s nudging others toward. He bikes to work as much as possible, even though it’d be easier to drive and park. He also sticks to a primarily vegetarian diet (but eats seafood occasionally).

Reed uses Joro to track and manage his personal footprint. By linking his cards to the app, he can make a clear connection between his shopping habits and the emissions they produce.

“Joro helps you take a step back and look at the bigger picture,” he says, “and see where you can make some of the deeper cuts.”

It’s impossible to completely eliminate our impact in a fossil-fueled world. So Reed uses Joro’s Net Zero Membership to compensate for the emissions he can’t avoid, through a portfolio of high quality carbon offsets.

“Just by existing, we’re going to have a carbon footprint,” he says. “So being able to have some vetted offsets is one of the only ways we can neutralize our footprints.”

Net zero is a long way off, and it’s not guaranteed. Reed still worries that systemic shortcomings will prevent the change we desperately need. The way the US and global economies are structured, he says, allows companies with a vested interest in continuing to pollute to co-opt the democratic process.

Take COP26 in Glasgow as an example. The fossil fuel industry sent 503 delegates to the recent climate negotiations – more than any single nation.

But despite all this, Reed believes the people within our global systems are more powerful than corporations that exploit them. He finds particular inspiration in the young people worldwide stepping into climate activism.

“My hope really comes from the movements,” he says, “and how engaged youth are in pushing  those who have more power than they do to make hard choices and take those actions.”

“It all comes back to people working together,” he says. “We need to push for change from the bottom up.”