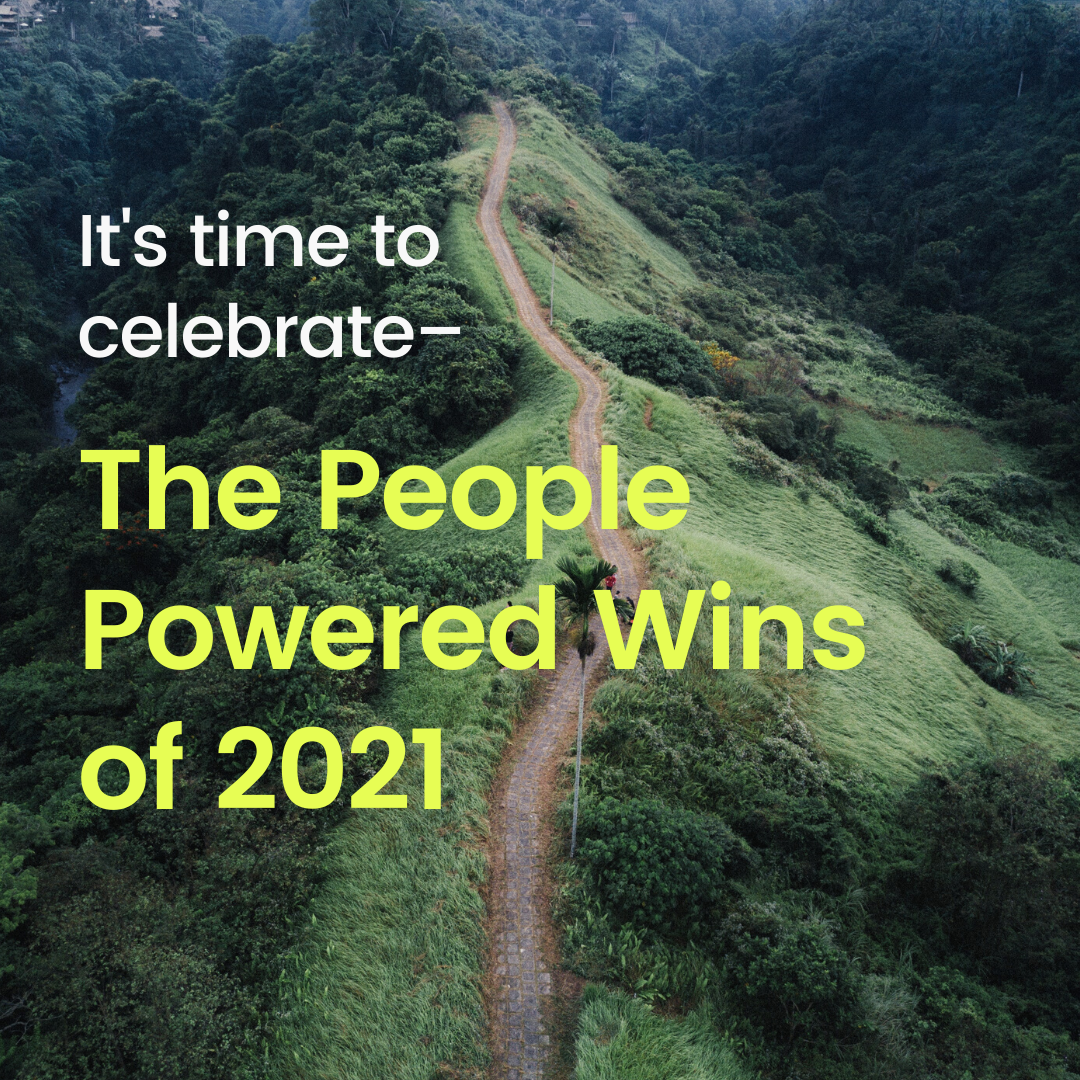 From deadly heat domes in the Pacific Northwest to unprecedented flooding in Germany and China, 2021 was another scary year for climate change.

It’s easy to look back and shudder – but it’s not all bad. This year, regular folks around the world mobilized to reduce global emissions, defund fossil fuels, and fight for environmental justice.

Had your fill of doom and gloom? Let’s take a stroll through the top people-powered climate wins of 2021.

In 2019, Swedish youth climate activist Greta Thunberg crossed the Atlantic Ocean in an emissions-free yacht to speak at the UN Climate Action Summit in NYC. Her journey launched a global dialogue about aviation’s carbon footprint.

A single transatlantic flight generates more emissions than individuals in many countries produce in an entire year. Nearly 90% of the global population has never traveled by plane; but everyone suffers the consequences of a warming planet.

In early 2021, France moved to ban short-haul domestic flights. Affected routes are those that could be traveled by train ride in less than 2.5 hours. On average, flying produces 77x more emissions per passenger in these cases.

The legislation is important for France’s net zero goals, but the ripple effects could be even more profound. Currently, Greenpeace is pushing for a short-haul flight ban throughout all of Europe, with 62% of EU citizens on their side.

Power Up: Visit Greenpeace’s interactive map Better By Train to add routes you’d like to see in the future.

Our dinner plates are a powerful tool in the fight against climate change. That’s because over one-third of global emissions come from food production, and animal products have carbon footprints 10 to 50 times greater than plant-based foods.

The good news? New research shows one in four Americans are eating less meat than they were a few years ago. Young people are leading the shift, with Gen-Z and Millennials 3x more likely to be plant-based than folks over the age of 50.

Our shifting preferences are changing the food industry. Retail sales of plant-based products (those that directly replace animal products) grew by 27% last year, drawing purchases from over half of US households.

Power Up: Download Joro and join a weekly or monthly plant-based challenge.

Over 65% of Americans had climate on the mind when they headed to the polls in 2020. Democrats emerged with majority control of all three branches of US government, thanks in part by grassroots efforts by climate coalitions like Sunrise Movement,

After months of negotiations, President Biden signed a $1 trillion dollar infrastructure bill in November 2021. The bill allocates a historic $47 billion for climate resilience in the US. It’s a major step, for sure – but experts say it’s not nearly enough.

A second bill under consideration, the Build Back Better (BBB) Act, earmarks an astonishing $555 billion for impending climate challenges, the transition to a green economy, and boosting economic equity. It doesn’t, however, mandate emissions reductions or a shift from fossil fuels.

While we need much more, the BBB marks a monumental shift in US climate policy. At present, the bill has passed the House of Representatives and awaits a vote in Congress.

Power Up: Pressure your representatives to support the BBB with #Call4Climate
‍

Twenty fossil fuel companies produce a third of global greenhouse gas emissions. This year, shareholder activists took action from within the belly of the beast.

In May of 2021, Engine No.1 sent shockwaves through the fossil fuel industry by staging a successful shareholder rebellion at ExxonMobile. With the unlikely support of key institutional investors, the tiny hedge fund replaced three members of Exxon’s board with pro-climate directors.

Power Up: Put your money to work with Engine No.1 and Follow This.
‍

Investors hold a powerful tool in the transition to a clean energy society: their financial capital. And movements pressuring powerful institutions to divest from fossil fuels are gaining steam.

Numerous major universities pledged to divest in 2021, including Harvard, Cambridge, and California State (the largest public university in the US). Harvard’s endowment alone is worth $41 billion, so these victories have serious impact.

Also in 2021, BlackRock, the world’s largest asset manager, doubled down on promises to put climate at the center of its investing strategy. (Notably, BlackRock also voted in favor of the Exxon shareholder rebellion.) The grassroots climate movement #BlackRocksBigProblem is directly responsible for the pivot.

Power Up: Decarbonize your personal investments, and support campaigns pressuring your alma mater or other organizations in your community to divest. Join your local 350.org chapter to join a local campaign.
‍

The results of November’s COP26 climate summit were both encouraging and disheartening. But in many ways, the true highlights of the conference took place in Glasgow city streets.

Throughout the 12-day summit, protesters from all backgrounds gathered in the tens of thousands to demand bold, socially- and economically-equitable climate action.

Estimated to reach nearly 100,000 at its peak, the mass gathering signals climate change is no longer a fringe issue – it’s a mainstream concern.

Power Up: Join or support youth groups like Sunrise Movement and Fridays for the Future, who are mobilizing youth to lead the charge.
‍

With a close relationship to nature and its resources, Indigenous communities are among the first to suffer the consequences of climate change. But their needs - and their solutions - are often excluded from global dialogue.

In the US, President Biden appointed Deb Haaland as Secretary of the Interior, the first ever Native American to hold a Cabinet position. Haaland serves as long-overdue representation at the federal level, and has pledged to put climate justice at the center of her work.

Power Up: Follow and support groups advocating for indigenous and local land rights like the Indigenous Environmental Network and the Global Alliance of Territorial Communities.
‍

After more than ten years of heated protests and lengthy lawsuits, the battle over the Keystone XL pipeline is finally over. Slated to carry 830,000 barrels of Canadian tar sands each day to the Texas coast, the project was one of the most controversial in recent US history.

Indigenous and environmental activists fought to halt the pipeline over three presidential administrations, citing the threat to Canada’s natural carbon sinks and the risk of transporting highly-corrosive tar sands through agriculturally and ecologically important areas.

On his first day in office, President Biden cancelled a key permit to construct and operate the pipeline over the US/Canadian border – which served as the nail in the coffin for the hotly-contested project.

Change Starts With Us

In 2021, the Joro community reduced our carbon emissions by 21% on average (and saved $3,300 each!). If everyone in the U.S. did that, we’d have an impact like taking every car off the road and shutting down 40% of coal plants. Explore Joro’s full 2021 Carbon Year in Review to reveal more about our collective power.